Risks of Hiring a Private Caregiver 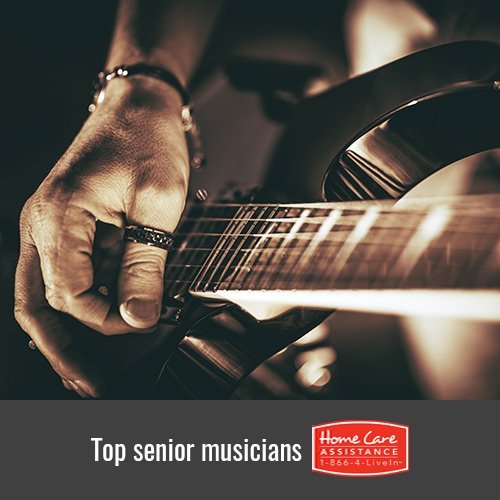 Contrary to popular belief, Dayton, OH senior home care providers know that seniors can still enjoy the hobbies they pursued in their youth. Just check out the following musical artists who have remained active in the music industry despite being past the age of 70.

Known for his storytelling lyrics and unwavering patriotism, the 79-year-old musician and vocalist is probably most widely recognized for his hit “The Devil Went Down to Georgia.” The South Carolina native’s career began in the 1960s as a backup musician and was even featured on three of Bob Dylan’s recordings. Inducted into the Country Music Hall of Fame in 2016, Daniels continues recording and performing his songs.

At the age of 89, the rock ‘n roll guitarist continues to appear in up to 100 concerts every year. Some of his best-known recordings include “Johnnie B. Goode,” “Roll Over Beethoven” and “My Ding-a-Ling.” Once a licensed cosmetologist, Berry’s musical career began in the 1950s and is still going strong.

Once a member of Derek and the Dominos, Clapton is known for a variety of popular songs that include “Layla,” and more recently, “Lady in Red” and “Change the World.” The British artist continues to perform, compose and record songs at the age of 71.

The renowned 72-year-old member of the Rolling Stones maintains a busy schedule. In 2015, the guitarist released a solo album entitled Crosseyed Heart. Along with performing with the band, Richards also enjoys acting from time to time and will make his third appearance in the Pirates of the Caribbean franchise.

Though the 71-year-old began his professional music career during the 1960s, the rocker did not reach popular status until a decade later when he moved to Los Angeles and released the hit single “Tonight’s the Night.” His other top 40 hits include “Maggie May” and “Forever Young.” A diagnosis and subsequent treatment for thyroid cancer did not deter the artist who continues performing and recording his beloved music.

Growing older is a fact of life, but it shouldn’t deter people from pursuing their interests. With support from Home Care Assistance, local seniors will get the encouragement and enrichment they need to live active lifestyles that enable them to maintain their hobbies and manage daily life around the house. We provide flexible live-in and hourly Dayton home care designed to fit our clients’ individual needs in the comfort of their own homes. Call us at (937) 353-1412 today to learn more about our services and how we can tailor them to help your loved one.